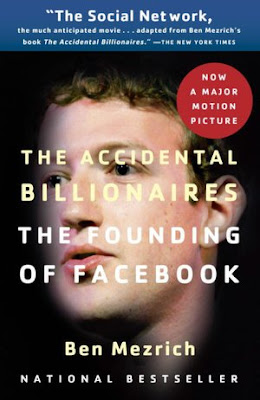 I just finished reading the book  The Accidental Billionaires: The Founding of Facebook, A Tale of Sex, Money, Genius, and Betrayal by Ben Mezrich - its a story primarily focused on how it all happened at facebook.com with Mark Zuckerburg , his VC venture capitalist friend and mentor Sean Parker, his co-programmer Dustin , initial co-founding friend Eduardo Saverin et.al.

As its stated in the Author's Note - Its a dramatic, narrative account based on dozens of interviews, hundreds of sources and notes from court proceedings which is summed up by author as what can be called as story of Facebook.

The book is narrative from various vantage points viz. The initial funding kid Eduardo who is co-founder and Sean at times who is also stated as co-founding president but for Mark there is not statements from him as the author states that he has refused !

Short Description of people involved :
Mark is described as a kind of Introvert guy but an obvious programming genius.
Winklevoss Brothers - (Tyle & Cameron) and Divya Narendra - who claimed that Facebook was their idea which they later conceived in form of Harvard Connection but not to mention that it didnt pick up like Facebook did.
On a different note they sued Facebook and Mark and won a significant payout in vicinity of sixty-five million dollars.
Other interesting mentions : Divya Narendra is children of India origin parents and Winklevoss brothers competed in U.S. Olympic rowing team in 2008 Beijing Olympics, placing sixth in the men's pair competition.
Eduardo Saverin :  The initial seed funding friend of Mark who had been looking at business side in the initial days.
Sean Parker : The VC friend who drives facebook.com from a small plant to a Big Tree which his VC connections.

The Story:
It starts with house Mark gets pissed of with a girl & starts programming on something to just take her off his mind and that was Harvard Face Mash which was an application which used to rate person based on their pics and all the pics were hacked in from various servers on the campus which used to maintain their details.

It was an instant hit, but then he closed escapes from being expelled and obviously tarnishing his reputation to some extent especially amongst the campus gals ;-) and like wise giving him publicity too..

This leads to the Winklevoss Brothers and Divya to approach him to program him on their website which they had been apparently working for some time. There is mention of exchange of 52 emails between Mark and them where in Mark reason for not having enough time but then later on going on and launching thefacebook.com

Facebook grows, Mark eventually meets Sean and on his advice they move to California, the turning point is when a VC Peter Theil promises funding of $5,00,000 and rest as they say is History..

Quotable Quotes :
"Certainly, he (Eduardo) had no way of knowing, then or now, that the kkid with the curly hair was one day going to take the entire concept of a social network and turn it on head"

After Sean thought he might get arrested at some party
"The odds are good that Mark was at the Facebook offices at the time - because he was almost always at those offices.
"May be it was still the middle of the night, or may be early morning; time had never been a very useful concept to Mark, just twitches in a clock that had no real-world purpose, no claim or innate value."

"Sean Parker was a genius, and he'd been instrumental in getting Facebook to where it was now. Sean Parker was one of the Mark's heroes and would always be a mentor, an adviser, and maybe even a friend"

Learn able Notes:
The focus and vision of Mark has been seen throughout the story
Similarly focus and hunting by the VCs like Sean and the energy and pace they bring to the table gives example of collaborating.

Movie: The movie Social Network is based on this book.
An excellent movie which is very engaging and interesting through out...
As mentioned here, "You dont get into 500 million friends without making a few enemies!"
By Kiran (http://about.me/hegdekiran) Kiran Hegde at Saturday, February 11, 2012