Fanatism and its self justified application! 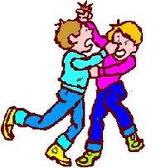 “Chikuuuuuuuuuu”  Saleem and Ronald shouted as Chetan had barely entered in and  were waiting since morning as they were looking fwd to meet their college mate who had returned back to India after his masters.

“Aaaahhh ” They almost pounced on him, kicked & punched him with all the collegian bad words they had left in their vocabulary after entering professional life…

Gasping for breath Chetan shouted “Buggers gimme water, idiots don’t even ask for water rather they treat with kicks…huh!!”

Thuddddd…. Ronald threw the bottle.. Chiku could have been almost hit in the head...but for his good catch.

Eventually they forgot everything as they were recollecting college memories and later encounters with a term called “Life!”

They heard something, some humming, till they oriented their ears in that direction. “Some one’s singing national anthem” said Chetan.

“Lo behold ur patriotism” said Chetan who always tried to taunt him at his fanaticism towards his religion. As the National anthem came to pause, trying to sit again he murmured,

“How come people now-a-days have so much patriotism left when all other supposed to be equnanimous values are dying in name of religion, caste & linguistic fanaticism?”

“It’s because its taught in the school perhaps, but why the hell do u bother?” replied Saleem as he continued “2 years in US haven’t changed you much” who had been close witness to two deeply religious, spiritual friends with one big difference viz. one is extremely secular (Chetan) and other one was perfect fanatic (Ronald).

“True! But if schools had so much impact they should be or already have been teaching lot other stuff too!”

“Controlling lot of negative emotions like its mentioned in Gita”

“Ronny where are u going” asked Saleem as he saw Ronniee getting up..

Three good friends who are very bonded to each other and seeming surprising difference thought Saleem just before his quickly added “You were saying something Chiku...”

Yeah the mention of practicing nonviolence, truthfulness, freedom from anger, tranquility, aversion to faultfinding, compassion and freedom from covetousness; gentleness, modesty and steady determination; vigor, forgiveness, fortitude, cleanliness, freedom from envy and the passion for honor”

Saleem and Chiku had discussed Quran and Gita numerous times and in their then shared apartment’s small worship Stand (call it home temple or mosque) and they always kept both together.

Saleem, Chiku and Ronny always visited temples, mosques and churches before exams with one exception Ronny would choose to stand out or leave for other places.

“These type of acute favoritism spring with lessons from home or spiritual places acquaintances, what say??” asked Chetan

“That’s exactly why you married to your caste girl, although Ronny had guts to have a Puneri Girl?” commented Saleem trying to pull his legs since he was one who although secular believed in marrying his own caste girl..

“Cmon I wasn’t committed to anyone..” replied Chetan

“No with ur parents.. Yaayyyy” replied Salmeem

Wherein she was kind of a person who had been almost fighting for a long time to go to Mecca of IT guys viz.US with her manager and had reservations with other place people migrating to her city

and they always thought

God save Ronny & Neeta and their respective fanatism!

Chetan was kinda embarrassed but he know internally he wasn’t masquerading but out of habit formed over a period of time.

“So when are you getting there..”

“And I am happy that’s this had been going on since a year.. hahaha” interrupted Ronnie.

“What re Ronniee.. kuchkat!!!” Her big round eyes now had turned little Red..

Chetan was woked up by the bus conductor

Daam thing, my don’t generalize old memories still haunt me in my dreams
Friends are friends & are independent of their thinking!!


P.S. This is purely fictional and has no resemblance to any person, caste, religion and its doesn’t describe behavior patterns of any caste or creed rather people of both views (secular & fanatic) exist in all places who are staying together & In spite of being staying together good friends many a times have different beliefs