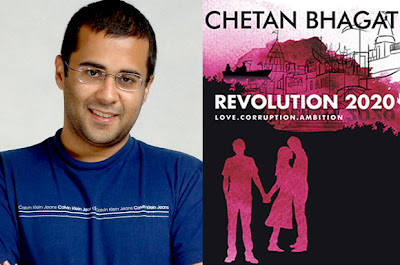 Abt the book in  Short :
Raghav, Gopal and Aarti are childhood friends who grow up together. Professionally Raghav becomes a IT-BHU grad, Aarti interests lie around becoming an  Air-Hostess & Gopal a wannabe engineer studies at an engineering college in his city after his 2nd try at IIT entrance.
Series of dates for years between Gopal and Aarti ends with Aarti & Raghav getting along together.
Gopal sets up a college with a surprising help from a local politician and becomes Financially successfull. Raghav opts out of Infosys placement after studies to become a journalist, his article and newpaper exposes the same politician's scams and blows him out of power.
A bit of Raghav's following his work and negligence of the relationship with Aaarti and a bit of her attracted towards Gopal with his display of power & money turns her towards Gopal but eventually Gopal screws up the relationship.
End of story shows up Raghav turning a politician after marrying Aarti "who's family is already into politics" which was portrayed as Gopal's would be status in mid part of the story.

Quotable quotes - Didn't highlight something inspirational.. :-)
Learn able Notes :
1.  Follow your passion (perhaps chetan’s philosophy also..)
2.  A some one "nobody" with out capability can be so called "successfull" with influence or money get used to it and at the same time you can work hard enough you could win too...
3. Society stereotyped definitions of "Sucess" are too many - dont let them calm your inner voice..

A not so dark side story about the Love & some what coherence to academic/professional Success, Education as a business which includes running of coaching classes to running engineering colleges wherein its ties with Politics is highlighted.
A too much of IIT glorification at times.
A nice representation of what success means to most many on-lookers, friends and parents which is most of the times within bracket of high ranks and a good job.
Following one's passions means being ready to face difficulties, again silent criticism of Indian corruption which favours the corrupt which most of us become comfortable with eventually.
An extremely good example of what it means to live with corruption and stand up against corruption. Can a small locally printed paper - printing few hundred copies blow up an influential political leader? May be ?
Some times its just that if fulfills a reader's fancy may it be fulfilling expectation of changing system or a turning around one's dream girl from someone else..
An extremely abrupt turn in the end which shows Gopal screws up his relationship with his girl friend, no one who is hiring such types of girls for his delegate or business partners would get them into his house or rather even allow & even if he does - incase of a shared institutional house as in the story would probably not bring them in such places or mess with them...