Chetan Bhagat and his books!

I am sure you arent asking "Who is Chetan Bhagat?" :-)

By any remotest chance if you are then the you can find out here that he  studied Mechanical Engineering at the Indian Institute Of Technology (IIT) Delhi (1991–1995). He graduated from the Indian Institute of Management (IIM)  Ahmedabad (1995–1997). After graduation he worked as an investment banker in Hong Kong.

That would be what most such IIT/IIM would be most happy with but Chetan choose a different path to pursue his passion for writing.
He has written 4 books so far and all of them have remained bestsellers till date...

A trend breaker – of course one would say... 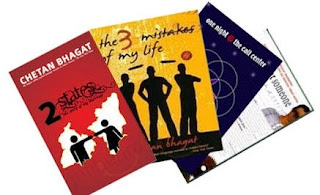 1.     Five Point Someone – What not to do at IIT! (2004) – A dark side book on 3 IITians viz Alok, Hari and Ryan who did all sort of not to do things at IIT securing 5 point something grades (which happens to be on lower side on scale of 10). It highlights many issues in the system in India which could be ragging, grading systems which as perceived leaves lesser room for creativity and so on..
Quotable quotes - C2D"(Cooperate to Dominate)
Movie - 3 idiots is based on this Novel although story line is considerably different..
Actors & their roles could be co-related as below
Aamir Khan – Rancho – Ryan – the seemingly wealthy, successful & intelligent
R. Madhavan - Farhan Khureshi – Hari – The narrator, photographer
Sharman Joshi – Raju Rastogi – Alok – Less confident seeming arising out of familial pressure.
Learnable Notes : All is well, Follow your passion (perhaps chetan’s philosophy also..)
2.     One night at call centre (2005)
Its based on  a group of six call center employees working in Connexions call center in Gurgoan, Harayana. Its how these 6 people traverse with their problems, Lot of mention about the cheap office politics, creating taking & too much filmly with the story Narrated by a beautiful girl in Train & the final call from God.
Movie – Hello is said to be based on this Novel
Quotable quotes : Dont remember any : -|
Learnable Notes : -
3.     3 Mistakes of My Life (2007)
Again 3 buddies
Govind – An typical less emotional more analytical business stereotypes
Ishaan – Cricketer by heart & by business later due to alliance with Govind
Omi – Represents back ground of fanatic political family back ground
Story line has combination of Riots to religionistic fanatism and secularism to Cricket love to Love Story.
Quotable Quotes: Life is an optimization problem, with tons of variables and constraints. You can minimise the pissed-off state, but can't make it zero. We can only optimise life, never solve it!
Learnable Notes : -
4.     2 States : The story of my Marriage (2009)
Is said to be fictionalized version of his own marriage story
You can relate a lot to Bollywood films, I particularly liked the explicit dialogues expressing statements of typical North & South Indian parents and their relatives when they find their son/daughter marrying some one not of their castes, states and so on... ;-)
Quotable Quotes :  -
Learnable Notes : IMHO (& personal O too.. ;-))
1.     A spouse of same caste/religion/state means default respect, love, acceptance n all & for other caste/religion/state means vice –versa
Why? – just because they think is to be incorrect/in-appropriate primarily because they didn’t have a say in it..
2.     The pace of acceptance in future is directly proportional to the professional success or displayed smartness or at least proportional to perceived smartness of the contender ;-)
3.     (Not all but definitely many) Families are least bothered about compatibility of the couple rather are most bothered about the increasing number of points they can brag about !
4.     The type of comment about you is going to be good if they like you and other wise if they don’t.. It hardly happens other way! : -)

Chetan Bhagat writes periodically in top newspapers which can be read one his blog here –
His writing style here is completely different & analytic
His awe-inspiring speech “Spark” is here and Excerpts are as follows :

“Life is not to be taken seriously, as we are really temporary here. We are like a pre-paid card with limited validity. If we are lucky, we may last another 50 years. And 50 years is just 2,500 weekends. Do we really need to get so worked up? It’s ok, bunk a few classes, goof up a few interviews, fall in love. We are people, not programmed devices.
I’ve told you three things – reasonable goals, balance and not taking it too seriously that will nurture the spark. However, there are four storms in life that will threaten to completely put out the flame. These must be guarded against. These are disappointment, frustration, unfairness and loneliness of purpose.You cannot avoid them, as like the monsoon they will come into your life at regular intervals. You just need to keep the raincoat handy to not let the spark die.!

P.S. I am not affiliated to him in anyways, just like him, kinda follow him, so wrote abt him!